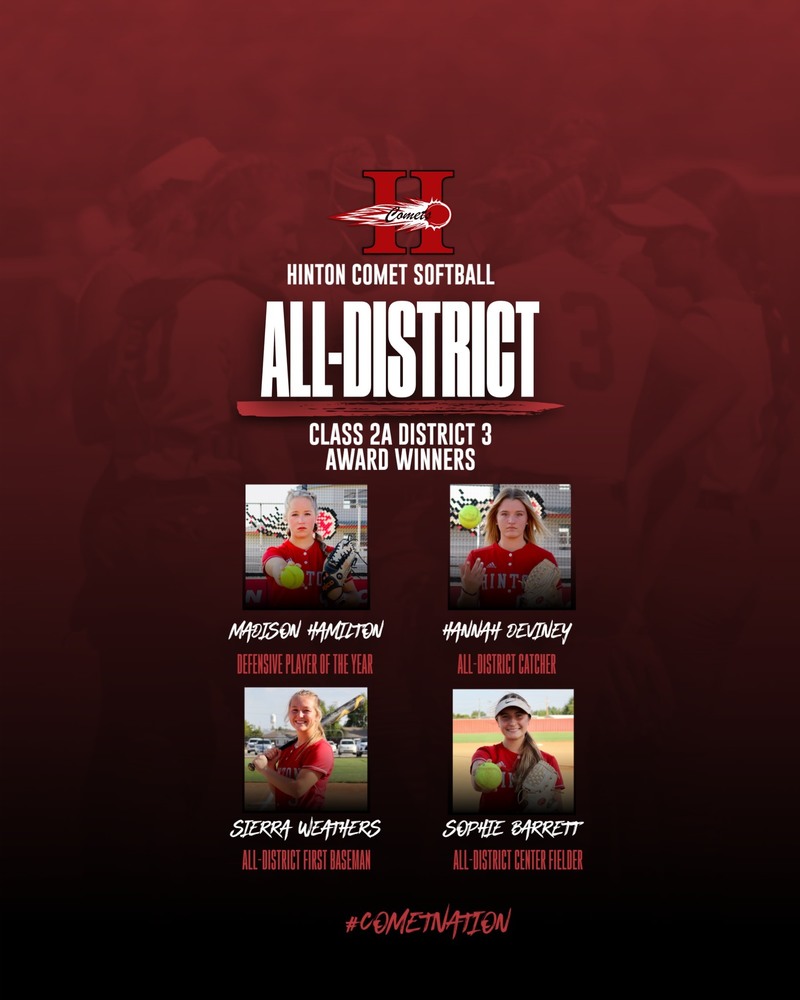 As a sophomore pitcher, Madison put up some dominating numbers. She finished the year with a record of 20-10 and 1 save. She had a total of 263 strikeouts while only walking 21 batters on the season. She finished with an ERA of 1.250 with opponents going up against her having a batting average of .193. She also fielded her position well, finishing the year with a fielding percentage of .964. Being the dual threat she is, Madi also led the Comets in batting average, RBIs, and home runs.

All-District Center Fielder Sophie Barrett had a tremendous senior season. On defense, she did not have a single error on the season, a feat to be proud of. She finished the year with 1 assist and 26 putouts. At the plate, the leadoff had a batting average of .253, 10 RBIs, scored 28 runs, and had 14 stolen bases on the season.

All-District First Baseman Sierra Weathers was a major asset both defensively and offensively this season. At the plate, she came in third on the team with a batting average of .299, with 26 hits including 8 doubles, a triple, and a home run. She finished the season with 18 RBIs and 25 runs scored. Defensively, she had a .830 fielding percentage.

Hannah Deviney earned the nod as the All-District Catcher. Hannah was a dual threat for the Comets. On offense, she had a batting average of .318, led the team with 11 doubles and 4 triples, and came in second on the team with 3 home runs. She also led the team in scoring with a total of 30 runs, and bases stolen with a total of 24 stolen bases and only being thrown out 2 twice the whole season. Behind the plate she showcased her arm, throwing out 14 runners attempting to steal. Defensively, she was a wall with only 7 passed balls in the 177 innings she spent behind the plate this season.

Congratulations to these girls and the rest of the Comet Softball team on their season! Your accomplishments are well-earned and well-deserved!